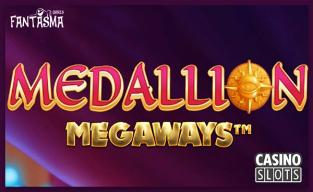 The latest slot from Fantasma Games takes players on an adventure across a 6x6 grid of symbols, floating in a Bedouin tent. Medallion uses the popular Megaways mechanic to give players a different number of ways to win in each spin. Up to 46,656 ways can be unlocked, for massive winning potential.

The game is set between fantasy and reality, with eye-catching symbol blocks dropping down to fill the reels in each spin. Winning symbols can vanish into the desert night, to be replaced by new ones dropping down from above. Each win in a sequence of symbol avalanches pays out with a rising multiplier, so the longer it goes on for, the higher the prizes can be.

With the perfect combinations, players can scoop huge wins of up to 12,331x their stakes. Features of the Medallion slots game include Void Respins, Expanding Wilds and a Free Games round.

The Wild Stone symbol causes all wilds on the reels to expand, creating high-value combinations. Any wins are multiplied by a random amount of between 2x and 6x.

A Void Respin symbol removes between 2 and 10 symbols from the reels, triggering another avalanche.

A mysterious gold medallion, with an all-seeing eye in the centre, overlooks the action on the reels. When it appears, players are treated to 10 free games, during which the Wild Stone and Void Respin features are active. The multiplier from any sequence of avalanches does not reset, so it can rise and rise right up until the the end of the free games feature.

Due for general release on 28th October 2019, Medallion will be available at the 200+ online and mobile casino operators which use the Fantasma Games range.