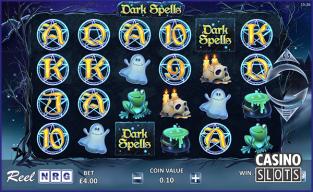 Dark Spells is a cartoon style new slot from ReelNRG. It's based around a witch, and comes with several seasonal images on the reels, such as a pumpkin, and cheerful ghost. This 6-reel PC and mobile-optimised game has 40 paylines, free spins and a pumpkin bonus game with prizes behind each symbol.

A Game For Halloween

Released on 24th September, Dark Spells will get players ready for Halloween. The cartoon style includes playing card symbols on pentograms, candles in a skull, and a frog. The game logo is a wild symbol that has the power to stand in for others if needed. The witch turns up at random to add extra wild symbols to the reels and trigger free respins.

The witch is also a scatter symbol, and if she lands in 3 or more places at once, players are rewarded with free spins of the reels. The pumpkin on reel 6 opens up a specail bonus round where players select from pumpkins to discover a prize hidden within each. During the free games, this symbol on any reel is enough to launch the feature.

Dark Spells is a medium volatility slot where average returns are 96.01%. Players can stake between 0.40 and 100.00 on each spin of these spooky reels from 24th September. It joins hit ReelNRG slots such as Goddess of Asia and Snow Wild at the top sites.