In recent times we’ve seen quite a lot of changes in the software market. Sure, the giants are still there, and new companies just can’t seem to stop popping up on a regular daily basis, but the main shift of the focus is on the indie makers who prefer making games for other companies.

Sure, you’ve read that right, smaller companies now tend to sign exclusive deals with big game makers, so that the quality of their products is ensured. They don’t need to think about providing backends or whole game platforms.

4ThePlayer has signed a deal with Yggdrasil, one of the largest names in the online gambling software industry, so the small indie company makes video slots exclusively for them. Their games are distributed to all the reputable online betting venues. 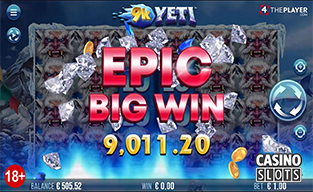 These guys focus on mobile players first and foremost, so all of their games are designed to be played on your smartphones or tablet devices. According to their official website, their goal is to create the most exciting games that would come with the best match profiles, very engaging mechanics, innovative features, and no confusing gameplay.

They aim to provide to the market with games that will feature memorable characters without any childish themes or styles.

As mentioned earlier, 4ThePlayer only makes video slots for other companies, and their first game is called 9k Yeti. It’s pretty obvious that the game is based on the mythical creature and the majestic Everest. You can almost smell the excitement in the air, while you’re out in the woods sunbathing, but you can also win over 9000X, so that’s where the name of the game comes from. You can catch the game in most well-stocked online casinos as it is distributed through Yggdrasil Masters Program.

Another gem from the portfolio is actually a revamp of an older game. We’re sure you can still remember the original Crypto game, and this is basically the same but with a whole new twist to it. 100 Bit Dice is devised so that it brings a much needed change to the world of table gaming and it can’t be played in most reputable online betting venues as it’s been distributed through Relax Gaming Silver Bullet Program.

There are also a few more games coming up: 1 Left Alive that will be distributed by SG/NYX OGS, the menacing Shark, and Zeus Vs Thor that also promises a lot of godly action.

When everything’s been said and done, it’s pretty fair to say that 4ThePlayer comes off as a clever new player in the online gambling software field. They have simply made it possible to balance the fine quality of games and the possibilities of being under the wings of larger companies.