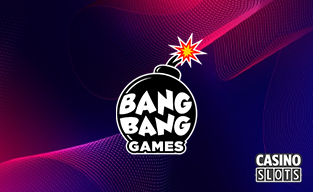 Founding a studio in April 2020, a small but enthusiastic community of trained professionals entered the industry eager to deliver products with easy-to-understand but hard-to-put-down mechanics. Only two months after the official entrance, the developer tied the knots with some of the most renowned brands from the industry.

Does Bang Bang offer any unusual features in its games?

A single glance at their immersive product and its structure answers the question- there’s a pyramid-shaped grid with “any adjacent pays”. Opting for something not so common from the first game indicates that they are ready to push the limits from the very beginning.

Stay tuned to find out more about the overall design and mechanics of Bang Bang Games’ releases!

Located right at the top of the magnificent mountain…

…the game hosts Zeus, Medusa, the Cyclops, and the Minotaur, along with the mighty Hercules. Shaped like a pyramid, the reels take players to the steps that lead inside the Pantheon where the mightiest twelve gods reside.

Though the theme itself is one of the commonly exploited ones, the team managed to breathe new life in it. Thanks to carefully chosen colors and meticulously illustrated characters and background, one is fully immersed in the story and its genuine atmosphere.

Contributing to the story a lot is the unique combination of features. There’s a giant pyramid made of three rows, with 3 reels in the first, 5 in the second and 7 in the last one.

In the basic mode…

…there are only 10 paylines, but thanks to Expanding Reels they number may grow. This feature can be triggered on any spin and it can add one or two more rows to the grid. Besides increasing the number of active paylines up to 30, it makes more room for additional winning combos.

Then, the game is packed with “any adjacent pays”, boosting the win potential additionally. It’s quite simple- regardless of where the combination starts, even on consecutive reels, one can score the prize. Zeus himself acts as Wild, and can replace the lower-value symbols, but also triggers extra spins along with Hades and Poseidon. It comes with an RTP of 96%.

…there’s an ear-pleasing Greek melody, and appropriate sound effects, making Wrath of Gods a well-rounded, feature-filled work of art. Plus, it’s done in HTML5, which promises the finest experience on the go for versatile types of devices.

The first slot was done in cooperation with Endemol Shine Gaming, a renowned developer of popular branded titles, using their cutting-edge Playzido platform. As agreed, Bang Bang should produce several more slots and table games both unbranded and themed, which will be displayed in ESG’s portfolio.

In addition to this…

…the enthusiastic developer opted for Yggdrasil’s GATI Technology to speed up its global expansion. It became one more studio to join their Masters Programme, along with DreamTech Gaming, 4ThePlayer, Northern Lights, and several more brands.