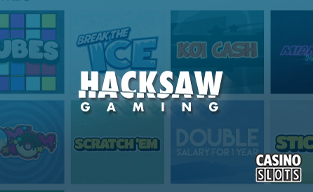 Even though their name might suggest that, the good folks at Hacksaw Gaming are no hackers at all.

As a matter of fact, they hail from Malta, where they’d first opened their virtual doors all the way back in 2018.

They operate under licenses issued by the Malta Gaming Authority and the United Kingdom Gambling Commission, which means that they care greatly about the security of all the punters who play their games in online casinos all around the world.

They claim that their main motivator was to reshape the games that were already on the market, and give them all a complete revamp. The best bit here is that they have quite a modern approach, as all of their products are developed using the “mobile first” strategy.

What started as quite an extensive scratch card game endeavor, turned out to be one of the most promising video slot portfolio projects out there. Even though this portfolio is quite modest compared to what the other software companies are doing, it is also very ambitious, as it’s clear that the focus here is on quality instead of quantity.

Combine this with the fact that they are always on the lookout for entering new lucrative deals with some of the hottest names in the iGaming industry, and it’s clear the good folks who run Hacksaw Gaming are on to something big indeed.

Does this sound exciting enough? Come with us, and we’ll check what exactly these guys have in store for us.

As mentioned in the previous section of this review, their main focus was on scratch card games at first, and even if those aren’t really your cup of tea, they are definitely worth checking out. They have more than 30 different scratch card games in their portfolio, and they are all awesomely executed and highly innovative.

Even though the portfolio isn’t exactly a large one, we aren’t sure where to begin. Perhaps one of the most attractive titles is the Haunted Circus. Over here you get to be the only spectator inside the big circus tent, and you get to enjoy quite a freak show.

Some punters may find this game a bit too grim, so if you’re one of these, we suggest you start off with Miami Multiplier!

Let’s not forget that besides all these good titles, Hacksaw Gaming also offers an excellent back office with a highly intuitive user interface where casino operators can fiddle with user management, bonus systems, and game assets. They can also configure the RTPs, generate detailed reports, and track all the player data and stats.

What about the Graphics, Animations and Special Features?

If we’re speaking of graphics and animations, the games on offer here are nothing short of spectacular. This stuff simply needs to be tried, as it is rather hard to explain, it is basically the next level of gaming.

It’s clear to see that the designers and developers worked really hard on these titles, and all of them look and work equally well on both mobile and desktop devices. Style-wise, the games are actually pretty much simple, but it’s the execution that really brings are jaws right down to the floor.

What we’re speaking of here, is that they took some classic games and elements and modernized them and revamped them completely.

It’s not just the visual appeal of the games, the bonuses also come in the form of a combo of tried out and innovative features, so you can expect to try your luck with extra spins, jackpots, multipliers, and many more.

They have been around for only a few years, but they have managed to cause quite a stir on the market. What they’ve shown so far is nothing but colossal potential.

We definitely need to keep an eye on these guys, as they are obviously destined for great things!

Wanted Dead Or A Wild