Established in 2015, Nucleus Gaming quickly grew to a recognizable status in the highly-competitive iGaming industry by creating content that is as immersive and varied as it is contemporary and stylish. Consisting of a team of individuals with a wealthy track record, this provider has been known to enter the waters of table games, but their signature niche have always been – video slots!

Excelling in both traditional iteration of slots (five-reels, ten paylines etc) and in 3D realm rich with animations, their slot games cover a variety of themes and subjects. Although one could argue that selection of these is playing it safe, there is a certain amount of comfort in playing games centered around ancient Egypt, pixies, fruit, dragons or polar spheres.

All of Nucleus' slot games come with plethora of special features, such as Wilds and Scatters (a pillar of slot industry), extra spins, progressive jackpots and rewarding mechanisms that can even turn a regular single spin into a gold rush. 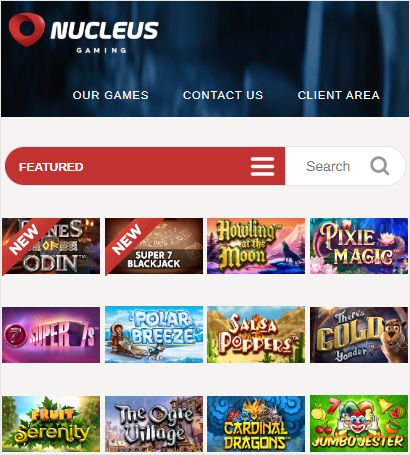 This company's stacked catalogue consists of titles such as Pixie Magic, Howling at the Moon, Polar Breeze, Salsa Poppers, The Ogre...

...The Moguls, Blades of the Abyss, Lucky Clovers, Catch and Release, Moon Bitten, Sisters of Luck, Sleight of Hand, Wild Adventure and so on. Virtually any of these games could be placed into at least several distinctive categories – that's why lovers of sweets, adventure games, animal themes, crime stories and even horror can find something that will tickle their fancy.

A majority of their titles are played on five reels, although this developer is no stranger to producing slots with 6 and even 7 titles (Ruby Jade is one such example). You can check out the selection of their slots below this article and read detailed reviews of each (and, preferably, give it a rating of your own).

The one thing that sets apart Nucleus Gaming from the numerous competitors is their immaculate approach to mobile gaming.

Defining this segment as their key mission and part of their website's manifesto of sorts, the company argues, very elaborately, through facts and numbers, that all the signs are pointing to mobile devices as the preferred method of gambling in the years to come.

In fact, they argue that by 2023, amount of bets placed on slots via smartphones and tablets will exceed $100 billion. With that in mind, they create games that are primarily intended for portable screens, no matter the orientation of it (landscape or portrait) although, of course, in modern age, it is imperative to wield both the mobile segment and desktop with ultimate precision called responsive design.

Blades of the Abyss

Jack And The Mighty Beanstalk

Review
Play
load more load all
There are 17 slots remaining