Nucleus Gaming is probing through the thick jungle that is contemporary iGaming scene with utmost confidence and passion about what they do. Right from the get go, this company's mission (they were founded in 2015) was defined as compiling an experienced team of individuals with a wealth of knowledge and a hefty track record and putting these assets into good use by creating a noteworthy content that separates them from the growing competition.

… stems from remembering to have a players' outlook: the declaration on Nucleus Gaming's home page states that “our love of gambling inspires us to create superior quality games that we, as players, would enjoy.” Whilst never forgetting the importance of catering the needs of desktop computer users (which are still the dominant force in iGaming) Nucleus' team does recognize the immense potential and remarkable capacity for the future that mobile gaming has.

As such, their portfolio of games truly comes to life on portable devices with Android and Apple OS. With state-of-the-art titles under their belt, the team works tirelessly on enhancing their software with features that do make a difference.

Some extra spins, free-for-all bonuses available with all genres, the brand chose as its playground, be it classic or 3D slots, or perchance table games and video poker. Whatever they put their mind to, it is certain to benefit from the perspective of infusing games with “fresh blood' – either new, unused ideas or recruiting talent that has a different idea about where iGaming should be headed.

Each good company should have a clearly defined mission – a manifesto of sorts if it intends to maintain their longevity through diversification and playing on their strengths. In the highly competitive world of online gaming developers, where the supply and demand overtake each other in one constant battle, finding a niche and sticking to it by excelling in it is one of the surest way to find your spot under the Sun.

...in mobile gaming: namely, they argue that by 2023, the amount of bets placed via mobile devices will exceed $100 billion. Also, by the same year, it will be near the 10% growth in the market of mobile gambling.

Bolstered by more figures such as that in 2018, global use of mobile internet accounted for over half of entire internet access (52.2%) and now nearly 3 billion of world's population uses a smartphone, the philosophy of bolstering mobile gaming is self-evident. Add to it the fact that, in the US, 237.2 million people access internet via mobile devices and that 43 per cent of time spend on smartphones is spent on gaming. 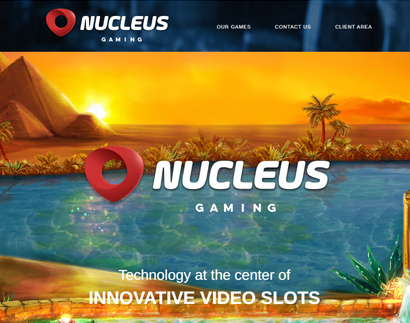 Boasting over 100 titles in their diverse portfolio of premium content...

...Nucleus' games proudly answer to a wide variety of desires and tastes. Although the themes of their games are varied and multi-faceted, they are all well-established on iGaming market and richly developed, making it seem that the company likes to play it safe when it comes to the topic of their entertainment.

However, spicing them up with visual intensity and strong mathematical models that enrich the game playing experience with utmost provable fairness and RNG systems that are regularly audited, makes for a wildly impressive portfolio with games whose specs are “unmatched by the competition”

Some of the subject of interest found in Nucleus' slot games are Ancient Egypt, fairies and pixies, cutesy animals, ogres, Polar adventures and so on. The execution and sheer quality of these games is top-notch, even if they do not bring anything revolutionary new to the table.

The usual mechanics of these games...

...includes features such as scatters and wilds, extra spins and progressive jackpots (on some of them). A good part of the deal is that all of company's offerings are available for free play at their own website. Their guiding principle is to always provide a well-balanced experience of fun, graphics of the highest order and spectacular prizes.

Some of the most prominent titles found in their library are Howling at the Moon, Pixie Magis, Super 7s, Polar Breeze, Salsa Poppers, There's Gold Yonder, Fruit Serenity, The Ogre Village, Cardinal Dragons, Jumbo Jester and Reels of Treasure.

Abandoning their usual slot focus and jumping on table games bandwagon, the provider has released Super 7 Blackjack in 2016, effectively entering this segment. In this game, a side bet adds to the excitement. 7S reward a side bet win with each card dealt and three 7s comprise a big win.

Primarily mobile device oriented and focused on portable gameplay, Nucleus Gaming does not neglect the everlasting lure and appeal of desktop gaming. While their games do not stray from what is normally considered mainstream subjects, nor do they employ groundbreaking techniques for awarding players...

...what they're doing and the range of action they're covering is all done in a best possible manner. Their 3D solutions and animations are some of the best in business (even their slots' low value symbols are not the ordinary card ranks, which is always such a lazy solution). In their catalogue, there is place enough for “traditional”, basic five reel games and also for contemporary slots with cascading symbols and all ways pays.

With gaming industry shifting to adopt numerous innovations such as gamification, virtual reality and hybrid of live dealer games with TV shows and other forms of entertainment, it will be interesting to watch what's in store for Nucleus Gaming.

They certainly possess the necessary capacity for innovation and for adjusting to the needs of newly emerging markets, becoming increasingly prolific and visible (something we hope to see an improvement in since their internet and social media outlets are hard to find). They should rest easy knowing that there is something to be had from these emerging trends. After all, they've demonstrated once they can keep up with the mobile revolution.

Why wouldn't they be the heralds of another one?