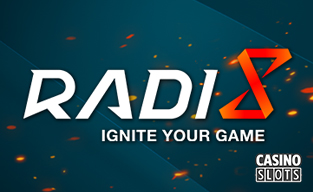 Launched in 2019 by Genesis Gaming, Radi8 is yet another small independent software company, but this time around we seem to have a true winner. These guys are focused primarily on younger generations of players and all those who feel like that, as their aim to make games for mobile devices first and foremost.

Perhaps it’s best to use their own words, as they seem to have some very grandiose plans on conquering the iGaming world… Here’s what they have to say: “Radi8 will bring never-before-seen slot features and game math in a mobile-centric design for optimal one-hand play. Rad+, a loyalty and engagement feature only available on Radi8 games, will offer game enhancers such as but not limited to loyalty coins, in-game boosters, leaderboards and level up achievements.”

Redefining it all will not be easy, but these guys seem to have quite a few surprises up their sleeves, intending to change the way we play at online casinos. 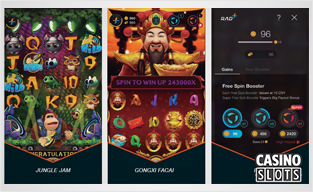 Panda Pursuit is their first slot and it involves venturing out into the jungle and trying to steal some fortunes from the pandas of Sichuan. The game comes with extra spins and unlimited re-triggers as special bonus features, while recently they’ve introduced a new edition called the Royal Edition.

The market has been really overcrowded with viking-themed games, but we really need you to pay attention to Viking Treasures, as it calls you to embark on an adventurous trip across the ocean to search for a hidden treasure.

Inspired directly by Hindy mythology, Ganesh’s Blessing is a game in which you can get really rich because of blessings coming directly from the god of success. Are you into cats? Well, Cat Kingdom, is all about cats, just as the title implies, and it actually involves a Cat King who rules his cute little kingdom.

Do you know what Gong Xi Fa Cai means? Well, it stands for “best wishes and greetings, much wealth and prosperity”, so what more could you ask for in a video slot? It really is all about getting rich, in a classy kind of way.

Jungle Jam calls out for a real rock ’n’ roll jam, but it needs to take place in the jungle, where you are supposed to play along with all the wild animals! No matter how crazy the idea it might seem, it is actually a great little game!

Other cool titles you need to check out include Solfire, Golden Children, and Dragon Blast.

The unique games with amazing graphics and mind-bending loyalty and bonus features are really something to hold on to, but can the folks from Radi8 stand up to all the promises they’ve made? They sure seem very ambitions and keen on creating quite a niche for themselves, and so far they’ve been doing very fine… Let’s sit and wait some more, it’s unbelievable what these guys can do!

Year Of The Ox