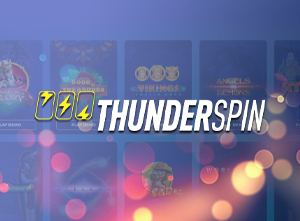 Gathering a forward-thinking gang of skilled producers with more than a decade of rich experience and plenty of knowledge, this Malta-located developer wants to push the limits and redefine user experience. Focused on digital one-armed bandits, they brought new energy and inventive ideas.

Can players access Thunderspin games while out and about?

Of course, as the entire selection of content from their creative factory is designed to work on versatile devices, courtesy of HTML5 technology. All games adjust various types of screens in a matter of seconds, be it desktop, tablet, or smartphone.

Keep reading to find out more about the producer’s wealthy library!

Taking a Look at Game Assortment

Slot games represent an excellent platform for bringing various stories to life and depicting them from some different perspective.

If cultures of the world…

…is your favorite choice, there are many marvelously painted tales from this sector such as Indian Gold, Egypt Story, Vikings: Frozen Gods, Book of Treasures, and the Kingdom of Glory, Calipso, each of them representing different civilization.

Sports fans have the World Cup Football slot, which not only brings the immersive atmosphere of the match but is filled with inventive features that take the action to a higher level.

For those looking for adventurous missions…

The library is equipped with several spine-chilling achievements, for those eager to explore the darker side of…well, of the story. Some of the releases from this corner include Necronomicon and Zombie Slot.

Which Features Can Be Found in Their Releases?

Wilds, Scatters, extra spins, and multipliers are what punters usually expect to find in releases, but Thuderspin goes beyond those limits.

As for the variance, there are low, middle, and high volatility titles, while the RTP ranges from 94.2% to 96.5%. It may not be the highest percentage one may find, but still, none of the games lacks a good atmosphere and action.

With a well-rounded collection of key segments, their services are adaptable and customizable in various markets all over the world.

…accompanied by Security and 24/7 Support are core pillars of their business. Taking engagement to a whole new level is their major goal, and thanks to innovative mechanics, flexible bonuses, and dedicated account management, they can transform every idea into reality.

Aside from operating under BOSS, the studio is also aligned with Salsa Technology. Moreover, the company got approval to offer its content in Italy. So far, the team has attended multiple conferences, such as iGB, SIGMA, and ICE London.

The Queen of Spades