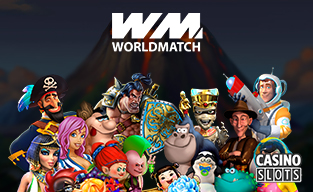 World Match has been producing games since early 2000, which makes them a relatively old and respectable company in the field of iGaming. This is partly also due to the fact that they have mainly concentrated on the Italian market. What kind of games did that result in? And what made the company seek worldwide fame?

We’ll answer those questions shortly. Meanwhile, it’s worth noting that the company has signed up plenty of new deals during the last few years, expanding their reach many times over. At the same time, they have grabbed up new licenses and come up with plenty of more slots to play. New currencies and languages have been added to the mix too.

The best games from Italy

It’s hard to say how famous and preferred World Match is in Italy. Obviously, you don’t build a portfolio of several hundreds of slots without gaining and having some sort of following. Safe to say, the slots seem quite popular.

And now you can experience that popularity too, as all the slots have been published in worldwide markets. The games are playable on desktop and mobile devices, with the latter seemingly the main aim for the company.

These are the main products that you’ll find amongst the selection of games. Slots make up the biggest group, then table games and after that a collection of interesting video poker titles.

Serving many different markets means that there are plenty of different versions of these games. Things like currencies at use as well as languages play a role, but so does variance and return to player. Make sure the latter uses the highest configuration! Luckily, our suggested casinos should automatically give you the best choice.

Are you looking for a theme?

The slots come with a pretty wild mix of themes. From the usual ancient gods or historical setups, you can jump into the supernatural horrors of Halloween, to the sweet and sugary lands of candy.

Or perhaps go underground and mine for diamonds? How about spending some time in outer space, or maybe a deserted island? You can just as well admire nature as you can spend some time with a classic slot with classic symbols. It’s variety all over the place.

Types, returns and so forth

The RTP might be a bit low in some games, though as we are told this also depends on the casino. Still, it’s not obscenely low, mostly settling somewhere between 95 and 96%. Wins range from small to huge, with variance setting mostly in use is either low or medium. An excellent choice for those who don’t always want to be playing high volatility games.

When it comes to special feature the company still have a thing or two to learn. Perhaps their selection if popular in Italy, but wilds, scatters, bonus games and pick-a-win features aren’t all the world’s most popular slots offered.

There’s certainly nothing wrong when it comes to graphics or sound effects, or animations and other effects for that matter. The returns are good and the games offer nice wins too. What’s lacking is variety in features and specials...overall, WorldMatch offers a nice collection of games that are ripe for the picking.

Review
Play
load more load all
There are 49 slots remaining