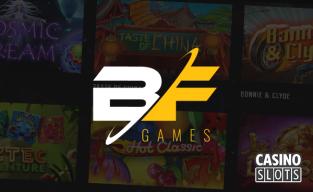 One of the most rapidly growing software providers in the industry, BF Games continues to expand into regulated markets and diversify its portfolio of video slots.

If you are already familiar with some of the BF spinning adventures, then you know what’s all the buzz about – an imaginative approach smoothly blended into top-notch visuals and driven by hell-roaring high volatility!

Yes, the majority of their slots are designed to deliver less frequent but hefty prizes – the idea of high variance is also complemented by a pretty extensive range of stakes, which usually goes up to €200 per spin and a classic Gamble feature that allows players to double their every win.

Games made by this relatively young London-based studio can be found at an increasing number of globally-renowned online casinos, so no wonder, their virtual one-armed bandits become more and more popular among the punters.

Let’s take a closer look at the titles that did well in the charts in October.

Truly immersive, this quest for secrets and treasures of ancient Egypt is taking place on a standard 5x3 grid enhanced with 10 pay lines ready to explode with winning combinations and show you the powers of mighty Tutankhamun.

Made of poor gold and decorated with stunning gems, the book is a scatter that not only brings decent payouts but also triggers 10 free spins with an extra scatter symbol. The great news is, free rounds can be re-triggered, so another dozen treats will be added to the remaining amount of spins.

This game can be programmed to return to players 92.15%, 94.19% or 96.12% of all wagered money in the long run, so consult the paytable at a particular casino to make the most of your journey through the mysterious deserts.

As its name says, this fruity machine is an upgraded version of the 5-line Stunning Hot (which follows tightly its superior successor on our list) and it’s incredibly hot due to very high volatility intended to generate impressive prizes.

You can start spinning these tasty-looking reels already at €0.20 per round and figure out if the juicy delights just look like gold or really made of gold. Just as in the great bulk of BF slots, the maximum bet is €200 – a suitable option for flamboyant high-rollers. Available RTP values are 92.13%, 94.25%, and 96.01%.

If something can change well-familiar fruity combos into a rain of gold, it’s a fire-breathing dragon that knows how to make things sizzling. Lucky sevens are the top-paying items on the reels while scattered stars can multiply your accolades by 100x!

Five reels, the same number of pay lines, very high variance, and again, three possible values of the theoretical RTP: 92.06%, 94.79%, and 96.01%. By the way, this blazing extravaganza was on top of the September list!

Accompanied by his cheerful green ball, Ramses takes you on a wondrous trip along the Nile delta and shows how bravery and foresight can turn the devoted warrior into an almighty pharaoh.

Even if you’re one of those who believe the old land of pyramids is overexploited by the game makers, think twice before skip this particular 5-reel battlefield – the payout percentage of98.11% is definitely worth a shot, isn’t it?

Three scattered balls are enough to activate 12 free spins, an expanding wild does its best to create as many triumphant sequences across 10 pay lines as possible…

… just do not look into the eyes of a green viper, which will try to hypnotize you, unless you’re full of confidence and ready for a fight that can start at just €0.10 a spin.

Another 10-line gripping story about the wealthy and prosperous old civilizations, but this time players are offered to visit ancient China and experience first-hand the powerful spirit of the flying dragon.

Beautiful lady Bao and handsome warrior Ju Cheng will lead you through the perky plot where three scattered books launch the free spins feature that includes a special expanding symbol. Incredibly high volatile, this amazing trip can pay back to participants 92.08%, 94.09% or 96.33% depending on the online casino you’re playing with.

A once-of-it-kind knight tournament with the rewards that befit royalties. In contrast to other 10-line video slots by BF, this one pays both ways plus, players can take advantage of a magnificent crown that acts as a wild and triggers free re-spins.

Set inside a medieval castle lit up by flames …

… the 5-reel arena is home to the classic symbols such as fruits and bells. High variance and the RTP of up to 98.01% suggest an epic contest, all the more so fighters can choose between 5 and 10 active pay lines and a wide selection of stakes. The minimum bet starts at €0.05 if you opt to activate 5 lines at €0.01 per line, the maximum limit is €200.

Considered the most talented Western mathematician of the Middle Ages, Fibonacci is widely known for his sequence, which consists of a series of numbers and every next number can be figured out simply.

Well, in line with the beautiful formula, the same-named 3-stepper is a quintessence of simplicity – it has only one pay line where punters can strike their lucky code and win the ticket to the high-off-the-hog life.

The best thing of all?

You do not necessarily have to match three symbols of the same color as even mixed combinations pay! Spin at as little as €0.01 to master your skills, hit at the max bet of €200 or choose one of the numerous stakes sandwiched in between the two extremes – who knows, maybe you will unlock your inner math genius!

If you like the winning potential of 3-reelers but still, indulge in some action, this Asian-themed release can easily become your new favorite. Unlike plain-vanilla Fibonacci, it boasts 27 ways to win and a bunch of extras: stacked symbols, wilds, and scatters. When three scattered Chinese characters appear on the screen, the lucky player is awarded 15 free spins and a broad smile of laughing Buddha.

Looking for something more innovative able to boost an adrenaline rush? How about 243 ways to win complemented by a myriad of sparkling diamonds?

Common cherries and oranges appear as the most luxurious jewelry masterpieces, the dollar sign shows up in full glory to play the role of a wild while the horseshoe pin is in charge of triggering 15 spins on the house! By the way, the latter comes in the company of stacked red stars and wild dollars.

Just a heads up, this 5-reel obsession for crystals can be a way past contagious!

It’s almost impossible to find someone not familiar with a very short yet extremely dramatic and turbulent life of two young outlaws. Just as their story leaves no one indifferent, this thriller fascinates with a plethora of engaging features.

Besides expanding wilds and scattered hearts, there is a Cigarette man intended to triple all your winnings once you see him on the reels. In addition to that, this game includes an exciting Pick & Click bonus that gives you a chance to multiply the prize up to 50x! Free spins are complemented by random performances of Bonnie and Clyde and believe us, they both have a lot to offer.