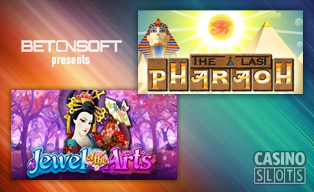 Each and every month there is a great array of video slot games that are released onto the market.  Some games are heavily advertised as being the next best thing to sliced bread, whereas some other games tend to get overlooked.

Two new games that have been released this week, but in our opinion have been somewhat overlooked is IGT’S Jewel of the Arts and BetOnSoft’s The Last Pharaoh.

Jewel of the Arts is an Asian themed video slot game with 5 reels and 20 pay lines. The game is set around the time of the Geisha, and its symbols look almost like they have been painted with watercolour paints.  Features include; a Fan Dance Bonus Round, a Wild symbol and a Free Spins round.

The Last Pharaoh is an ancient Egypt themed slot game and although there are plenty of Egyptian themed slot games on the market it was enjoyable.  It boasts; 5 reels and 25 pay lines, an Expanding Wild symbols, a Cobra themed bonus round and a Gamble feature.