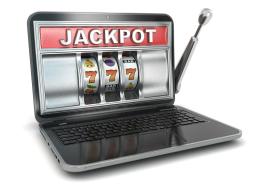 Golden Riviera Casino is a site that has been around for quite a while, and its use of the Microgaming online casino software is pretty well known. One of the most popular titles from this software is Mega Moolah, the primary game for the progressive jackpot of the same name. This jackpot was triggered for an incredible win worth just under €6 million recently. Known as the Millionaire Maker for a reason, this is only one of a large number of millionaires that this game has helped to create.

About the Mega Moolah Jackpot

The Mega Moolah jackpot currently holds the record for the largest online casino jackpot in history with a solid eight-figure payout, and it makes a number of millionaires each year. This game has been around for quite a while, but its popularity hasn't really dropped down all that much over the years it's been around. While other games like The Dark Knight have been added that also pool in with the same jackpot, it tends to be the main Mega Moolah game that triggers it most of the time.

One of the reasons why it's so popular is that it has multiple progressive jackpots, the largest of which always starts out at the $1 million level. This means triggering the top jackpot is always at least a seven-figure win, and that's an attractive prize for players at Microgaming-powered online casinos like Golden Riviera.

Since 2000, Golden Riviera Casino has been running using the Microgaming software, and it now uses their Quickfire platform. Microgaming started up with the very first online casino back in 1996, and they've dominated the market as a whole ever since. In fact, they are still one of the largest online casino software providers in the industry.

The thing that has helped this particular online casino stay so popular over more than a decade and a half is that they offer good promotions, a solid interface and great customer service. They're consistently rated as one of the top options for players of all types from all over the world, and they've proven themselves to be reliable and to take care of their players with quick, reliable cash outs.