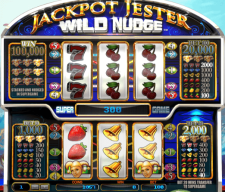 NextGen Gaming has released their newest game through the NYX Gaming Group's platform, and it's Jackpot Jester Wild Nudge. This is the latest title in the Jackpot Jester line of games, and it's the direct sequel to Jackpot Jester 50,000. What's so interesting about this game is that it offers a lot of action and a lot of features on a three-reel format that's been largely abandoned in this industry based on the perception that the genre is boring. This game definitely bucks that trend and offers a lot of high-paced action.

When you first look at this game, you'll notice that there are really two games in one. The way this works is that you'll start off on the bottom game playing normally. You can choose coin sizes that range from $0.01 to $2 apiece, and there are five paylines across three reels with three rows. You always have to bet at least two coins on each payline for a total bet of ten coins. However, you should always play with the option of four coins on each payline for a 20-coin bet because of the way the bonus feature works.

When you play with 20 coins, you get the option to transfer your payouts from winning spins into the Super Game. If you do, then you'll spend your winnings there in a game with a number of extra features. First off, you'll have an improved paytable with higher available wins. Second, you'll have nudged wilds that are also stacked, so you have chances for some pretty incredible payouts. Line up three stacked reels full of wilds, and you'll hit the overwhelming 100,000x top jackpot.

If you want to take a shot at Jackpot Jester Wild Nudge, then check out Mr Green Casino.