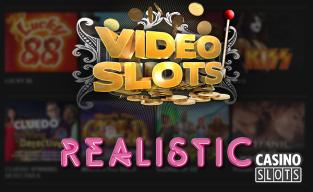 The online casino Videoslots.com is known for having an overwhelmingly large selection of slots, and they seem to constantly be in the mix with new content distribution deals. They've added to this number once again with a new deal with Realistic Games. This deal will see all of the latter's games added to this casino's platform in a move that shows just how dedicated they are to gathering the largest selection of high-quality slots available.

The Quality of the Games

Realistic Games is known for making extremely high-quality titles, and they will be offering up as many as 33 slots with the initial release. Other games could be added in the future as they are available, but the fact of the matter is that this is a pretty significant deal. Being included with Videoslots.com's selection means they have deemed you to be a high-quality provider, and that's exactly the type of name recognition that software companies want to receive. On top of that, it'll put their games in front of tons of new players.

This site's entire approach centers around using games from several different providers to give players the best selection of games available anywhere online. They've largely achieved that, but it's all possible because of the current climate that we're in for online casino play. Most casinos these days are offering up games from multiple providers, and that's exactly what Videoslots.com is doing with yet another deal, this time from Realistic Games. The only difference is that they have taken it to a whole new level, and if you're putting out good slots, even if you don't have but a few dozen of them available, they're probably going to want to make a deal with you sooner or later.

Videoslots.com broke the 2,000-game mark earlier this year, so it's clear they're about giving players a large quantity of games. However, they also focus on quality in the sense that they're not just signing deals with anybody. Instead of padding their numbers with games that nobody really wants to play, they focus on making high-end signings exclusively. This means that being included in that number is a pretty big deal, as Realistic Games is finding out for themselves right now.