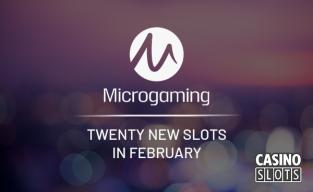 February might be the shortest month of the year but that hasn’t stopped Microgaming packing the 28 days with the release of 20 new slots. Ten of these come from their content partners and 10 from the network of independent studios.

Gangsters, pirates, and Jokers are among the stars of the new Microgaming-branded slots landing at desktop and mobile sites this month. The first game is Chicago Gold, from PearFiction Studios, where a cartoon mob appear over 5 reels and 20 lines. Any of the four jackpots are available to players who land jackpot symbols at the same time as a Collect symbol.

The Juicy Joker Mega Moolah slot comes from Microgaming in partnership with JustForTheWin. Players who land 3 Joker symbols will enter the world-famous jackpot round for one of the biggest progressive prizes found anywhere.

Microgaming and All41 Studios launch their 6 Tokens of Gold slot this month. It’s a classic fruit machine with an innovative HyperHold mechanism, where players can trigger respins with guaranteed payouts at the end. Those who fill all 15 spots on the reels during this round will collect a Mega jackpot prize.

The HyperHold system also features in the pirate-themed Adventures of Doubloon Island slot from Triple Edge Studios. Scatter symbols pay up to 100x the stake before triggering a free spins round, while skull symbols feature in the HyperHold respins, where treasures await lucky players.

A mad scientist is the star of the Blirix Workshop slot coming this month from Iron Dog Studio, while Inspired bring the Reel Lucky King Megaways, and Temple of Light slots to Microgaming casinos. Bar Slot is a classic pub-style game from Golden Rock Studios, and other games coming out later in the month include Reel Diamonds, from 1x2 Gaming, Yola Berrocal by MGA, and Cosmic Gems from 2By2.

Finally, some fruit-themed games are set to make a splash at Microgaming sites by the end of February, with Fruity Bonanza: Scatter Drops from Inspired, and Opal Fruits coming from Big Time Gaming.

Source - Microgaming propels into February with the release of a staggering 20 new games https://www.microgaming.co.uk/news 8th February 2021