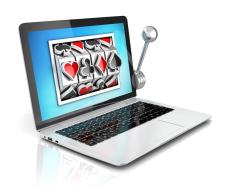 A number of new slot games are coming up from some of the top software providers in the online casino industry. Major companies like NYX, Kiron Interactive, Microgaming, Net Entertainment, Inspired, Yggdrasil and Play'n Go all have new releases coming up soon. The International Casino Expo (ICE) coming up soon has a lot to do with this because every company wants to make a big impression on players and the industry at large.

Some of the Upcoming Titles

A good example of this is the Guns 'n Roses slot coming up for Net Entertainment on January 21. This game has been anticipated for quite a while, and it's finally coming closer and closer for the time of the release. Also coming up on January 14 is Play'n Go's title Book of the Dead, a ten-payline video slot that uses an older Egyptian theme. This is loosely based on the same themes as the Mummy series of movies, and it features a new character named Rich Wilde who helps players during gameplay.

Also coming up soon on January 21, the Incinerator slot by Yggdrasil is probably going to turn out to be pretty exciting. It uses five reels, three rows and 20 paylines, and it's based on a fun concept of the universe's largest incinerator looking for space debris to turn into big wins on the reels. This will happen around the same time as the Fantasini: Master of Mystery slot is released to the general pool of casinos from Net Entertainment. It's been exclusive at SportingBet for a while, and now it will be available at a wider range of casino sites.

The Importance of These Games

The new releases that come out around this time of year are important for a few reasons. First, they are just in time for ICE, and every software company wants to make a strong showing there. Second, it's the beginning of the new year, and a company's first new release sets the tone for the next 12 months. Having a strong showing is a good way to build momentum that can carry them through to 2017, and that's especially important considering the position the online casino industry is in right now with so many software companies coming up and gaining ground.

Players who want to try the new titles from Net Entertainment should check out CasinoLuck.