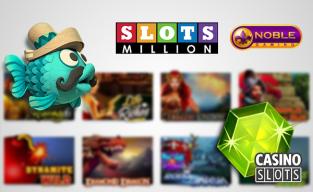 The paradigm in the early years of the online casino industry was centered around having more games than everyone else. Eventually, that paradigm shifted to having things be more about quality than quantity. SlotsMillion has taken the best of both worlds by getting with a lot of different software providers that produce high-quality content to create a tremendous selection of well over 1,000 titles. They are always on the lookout for new games to add to their portfolio, and a recent deal with Noble Gaming has been the result.

Noble Gaming's focus so far has been on Latin American markets, and they are using this opportunity with SlotsMillion to expand to European markets as well. They have more than 150 titles, and their game selection is largely high-quality. This makes them fit in perfectly at this online casino, and it definitely creates a win-win situation where both sides are getting something they want out of the deal.

The State of the Industry

This is an important deal for two main reasons. First, it shows that SlotsMillion is still out looking to improve, even though they are generally considered to have the largest selection of high-quality slots available at any individual online casino. Second, it shows that there are more and more lesser-known software developers getting in on the action with the big names. The current state of the industry allows for this because the current paradigm is all about software platforms that can support games from multiple providers. This is a big plus for the players because it allows them to get a ton of great content in one place.

SlotsMillion is starting off 2017 the right way with a big announcement for new games, and if this year is anything like 2016, you'll be seeing a ton of other announcements or new content coming up over the next several weeks. They are really on the ball with continued expansion, and they are hardly resting on their laurels. We also expect to see some expansion on their virtual reality platform as well, so it's exciting to see what's coming from them in the next 12 months.