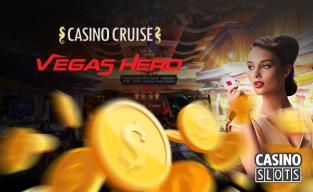 Genesis Gaming run a number of online gambling sites, among them are Vegas Hero Casino and Casino Cruise, where some fortunate players have recently picked up massive wins on the slots games.

Of the top three prizes won over the last few days, two were struck at Vegas Hero Casino, where an un-named player from the UK landed a £58,400 payout, plus an incredible 1350 free spins. He had a £50 stake on the King Kong slot from NYX Gaming, and scooped all of this in a single spin.

Also at Vegas Hero Casino, Norwegian player Ahelvik was spinning the reels of Treasure Nile with a €4.50 stake when he landed a progressive jackpot payput of €86,630. The stunned Ahelvik had only been playing at Vegas Hero Casino for a couple of weeks and was enjoying a quite time at home when the jackpot was hit. He now plans to buy a new car and go on a nice holiday with some of his winnings.

A bet of just €3 was all that a player from Finland needed to claim a massive €162,596 jackpot on the Divine Fortune slot game at Casino Cruise. Although his name hasn't been released, we know that he's a construction worker who hasn't had time for a holiday for 6 years, and this huge prize is going to pay some bills, go into savings and send him on a well-earned vacation.

These sites each carry over 1,300 games from some of the top developers in the world, including Microgaming, NetEnt, NYX Gaming, Play 'n GO and Quickspin. They are fully licnesed for fair play, security and reliability, with players recieving bonus deals and special offers on a regular basis.