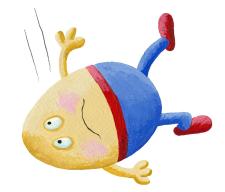 Mr Green Casino is known for having a wide range of different slots from several different software providers, so they get a lot of new releases. Their most recent release is the Humpty Dumpty online slot powered by Push Gaming. This title has a great animated graphical motif that looks a lot like the older Disney movies that had hand-drawn animation, and it has some features that give this nursery rhyme slot some action.

Details on This Release

This new release uses five reels and three rows with 25 paylines. Your betting options are chosen from a cool pull-down style menu that expands to make it easy to select the single bet size you want per spin. The bet sizes available range from $0.25 per spin (along the lines of $0.01 coins) to $100 per spin (which would be like $4 coins). The interface is very clean, and it's obvious that it was created with both desktop and mobile players in mind as you can tell from how the controls are formatted.

This game has a fun free spins feature based on getting Humpty Dumpty on the center reel. During these free spins, you can collect hearts on the middle three reels. When you pick up three hearts from the same reel, the entire reel will turn wild for the rest of the free spins feature, so it's possible to get a lot of extra wilds. There's also a falling wilds re-spin feature that pops up during normal play, and it gives you a chance to get re-spins with wild symbols moving across the board one spot at a time.

Mr Green Casino always has all kinds of new releases being added, and their newest game from Push Gaming is a good example of that. They have hundreds of slots from the top providers in the industry, and that selection includes games from Net Entertainment, Microgaming and others. They also have an aggressive selection of promotions like reload bonuses, cashback rewards, slots tournaments, raffles and other giveaways that set players up with extra value. Overall, this is a great place to try the new Humpty Dumpty online slot, so make sure that you cash in on one of their great promotions while you play.