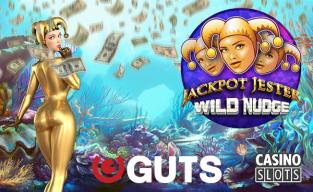 A lucky player from Sweden logged in to play on May 22 with a small deposit. He ran that deposit up a substantial amount, and then he decided to play Jackpot Jester Wild Nudge It didn't take long, just a few spins into play, to nail a sizable jackpot with jokers all over the reels. The win comes in at over 1 million SEK, which is worth a little over €100,000 or $100,000.

NYX has a series of games in the Jackpot Jester series, and Wild Nudge is one of those. The idea behind this game is that it centers around a feature that sees players enjoy a super game with wild and nudge features. This makes it much easier to hit winning combinations, and it gives players added ways to win big prizes, including a sizable top jackpot. The lucky player from Sweden was able to nail a massive win on this game along these lines.

There's no denying that today's online casino industry is dominated by video slots, but classic slot fans still exist, and they find a lot of action in the Jackpot Jester series by NYX and other similar titles. The appeal of these games over their five-reel cousins resides largely in the fact that the gameplay is relatively simple with fewer bells and whistles to worry about. They are centered almost always around a single feature or jackpot, and this makes it easy for players to stay focused on what's important when they play.

Guts.com or Guts Casino has been in action since 2013. They have games from the Microgaming Quickfire suite, which includes titles from NYX like the one that triggered this big win, but they also include titles from Net Entertainment as well. They are very respected with a great reputation and licenses from Malta and the United Kingdom in addition to Curacao. On top of that, their promotions are solid, and they have a large enough game selection that players will be able to find exactly what they're looking for, no matter if they want to play via desktop or mobile.