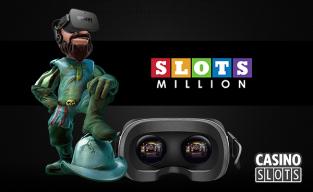 SlotsMillion is known for having a huge number of games, but it's also known for having the world's first virtual reality online casino. They had a study done on their behalf by well-known agency Opinium that surveyed a representative sample of 2,000 people to find out what people were doing in terms of VR engagement, and the numbers are higher than many people might expect.

The Key Numbers From This Study

The first thing to note is that 92 percent people have awareness of virtual reality technology in its current form, and a total of 23 percent have tried it in some form or fashion. Around 2 percent have even picked up more than 25 hours in virtual reality platforms with 6 percent coming in around 1-24 hours of time. A remaining 15 percent said they have used VR "once or twice" without considerable hours being put in. This is great news for the future of the VR casino industry online.

The Importance of Virtual Reality

For online casinos, virtual reality is the next big frontier. It's where the industry is definitely heading now that mobile numbers have started to saturate and even off to some degree. According to this survey, around two-thirds of people are very interested in VR technology, and it's reasonable to assume that many players who like to gamble online will be interested in doing so in a virtual reality interface as well.

The virtual reality casino at SlotsMillion was the first of its kind, and it gives players a chance to play dozens of top-tier online slots in a fully immersive experience. Players can walk around a virtual slots lounge and play their favorite titles. You can even see other players getting in on the action with different games, and there's a complete lounge area where you can sit back and play on a virtual "big screen" while you sit on a virtual couch area and enjoy the ambiance.

With such a strong interest in virtual reality, it's only going to be a matter of time before other companies start pushing their own VR products, and Net Entertainment has already announced plans for full-VR slots coming in late 2017 or early 2018 as well.