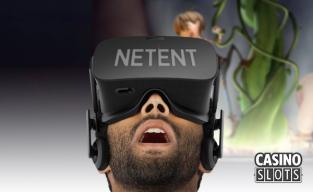 A lot of people thought that smartwatches would be the next frontier for online casino games, particularly slots. Unfortunately for the people who made that prediction, there were a lot of complications that kept that from becoming a reality. Too little screen real estate and too few people actually owning or desiring the devices put a real damper on that. Shifting away from that particular technology, however, is the simple fact that virtual reality is the next frontier for online casino play, and Net Entertainment wants to help lead the way.

Comments From CEO Per Eriksson

In a recent interview, NetEnt CEO Per Eriksson pointed out something fascinating: They are actually ahead of the hardware available for virtual reality games, and they have prepared VR releases for the last quarter of 2017 or the first quarter of 2018. That means that this time next year, there will be VR slots available for real money play from the company that many agree is the number one slot provider in the industry right now. That's very exciting news.

The Influence of VR on Casino Games

There have already been virtual reality games put on displace here and there, and SlotsMillion has a VR casino concept that allows people with a virtual reality headset to walk through a virtual casino and enjoy several slots in a fun environment. This can also be played through your desktop or mobile device using your mouse to navigate and play the games, though the experience isn't as immersive for obvious reasons. There are many NetEnt titles includes in this VR casino, but none of them were specifically made for virtual reality.

As per Per Eriksson's recent comments, that will all be changing soon enough.

How Can NetEnt Top Itself?

In 2016, we got a ton of great releases from Net Entertainment, including the NetEnt Rocks! series that was critically acclaimed. A lot of industry experts have been wondering if they would be able to beat 2016 with what they do this year, and it was hard to figure out how they could do it. Now it's pretty clear that virtual reality is the answer, and we're all anticipating the upcoming VR releases.