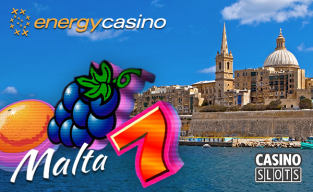 Jaroslav is a name that has been popping up a lot recently for EnergyCasino. Since the end of August, he's pulled some pretty incredible wins. He picked up a smooth €23,000 on Elements: The Awakening, over €30,000 on Stunning Hot 20 Deluxe, more than €45,000 on Roaring Forties and well over €100,000 on the Stunning Hot game. Now he's made news once again for being a new first at this online casino.

Jaroslav was the first player in the history of the casino to cash in his EnergyPoints for a Mediterranean trip to Malta. This is a part of a large overall vacation package that included visiting the EnergyCasino headquarters and having a film crew follow him around to get footage for a video package showcasing his trip. It's a pretty big deal, and it's a much bigger prize than most players really expect to have available as a part of a loyalty program at an online casino. This is a good example of how this particular site stands out in what they give their players.

The State of Online Casino Promotions

Something that we've definitely seen over the past few years is that the state of online casino promotions is in a fairly stale state. It seems like every site is offering variations on the same sets of offers with deposit bonuses, free chips, cashback, free spins, etc. You might see some tournament or leaderboard competitions here and there, but that's about as much variation as players typically get. With this site, however, they've expanded outside the box and have given players opportunities to get in on great offers like a trip to Malta.

This site has been running since 2013, and they have licenses from both Malta and the United Kingdom. They primarily use the Microgaming Quickfire platform, which is known for having a ton of high-quality slots, but they've added the Net Entertainment library to that collection to give players even more. All of their games use their no download/instant play option, and most of them are available for play via mobile devices. Overall, they are putting players in a position to get much different types of value from their promotions, and that's getting them a ton of attention.

Press Release, Living Like a Winner in the Mediterranean energycasinopartners.com, November 14, 2016