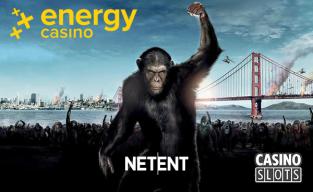 The Planet of the Apes slot release is a pretty big deal because it incorporates themes, characters and concepts from both of the most recent movies into one game. It also has a unique style of play with two different sets of reels and bonus features that really drive home the excitement of the films. You'll see Caesar and all kinds of other characters from both movies in this game, and it's available at Energy Casino.

This new game has a different format than usual with two different sets of five reels. Each of these sets has three rows of symbols each, and they are build around the characters from each of the past two movies, respectively. They have different color themes to help you tell them apart, but they are tied together by big bonus features that give you opportunities to get paid in a major way.

Try This Game at Energy Casino

Planet of the Apes is the hottest new game at this online casino site, and they have a lot to offer players. It starts with a 100 percent match worth up to €200, and they follow that up with a 50 percent match worth as much as €200 as well. That's up to €400 in value just for signing up, but they also have special leaderboard events and tournaments on a regular basis that give you even more value, so it's a great place for slot fans who want to get paid just for playing games they would have been playing anyway.

Energy Casino has been running since back in 2013. In that time, they've developed a reputation for having an excellent selection of titles and all of the hot new releases that you can handle. They have games from the Microgaming Quickfire suite along with the full selection of slots from Net Entertainment. On top of that, they offer live dealer games through Extreme Live Gaming. In short, they have everything you could want as a casino or slot fan all in one place, and that makes them a great one-stop shop for players who are looking for a site to call home.