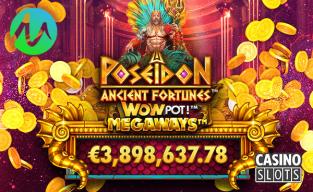 Just days after release, the Ancient Fortunes: Poseidon WowPot Megaways slot has paid out a vast progressive prize. A player from Sweden was spinning the reels at Videoslots casino when they landed a win of €3,898,637.78.

Incredibly, this huge win came just 4 days after the game was made available on general release. It’s the second biggest Wowpot jackpot payout, beaten only by a massive €17,529,047.11 win struck in April 2021. The winner becomes the fourth WowPot millionaire, and takes the total jackpots paid by Microgaming titles to over €1.45 billion.

This game comes from Triple Edge Studios and it’s available exclusively across the Microgaming network. With a mythology theme, it features crabs, octopuses, and dolphins, plus a golden trident and the mask of the Roman God of the Sea across 6 reels and as many as 117,649 winning ways. Rolling Reels can lead to several wins in a row as winning symbols vanish and those above drop down to replace them.

During a free spins round, an increasing multiplier rises by 1x on each occurrence of Rolling Reels throughout the round. Players collect wild symbols in a golden treasure chest, and a thrilling WowPot jackpot feature becomes more likely to trigger with more wilds in the collection.

Players pick coins to reveal the Mini, Minor, Major, or WowPot prizes, and the fortunate member of Videoslots made the ideal selections to claim a vast progressive prize.

“It’s amazing to see another massive WowPot win dropping just days after Ancient Fortunes™: Poseidon WowPot Megaways™ was released network-wide to our customers. Congratulations to Videoslots on this impressive payout, and to their player in Sweden.”