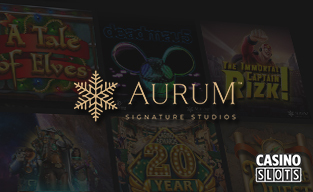 At its official site, the provider is featuring a total of 8 releases, even though it is stated that it has developed around 20 games.

From these displayed games, 20 Year Celebration and Treasure Quest were crafted exclusively for the members of the Casino Rewards group.

Since the studio entered into a partnership agreement with Microgaming, it is creating slots, especially for this supplier. Meaning that 6 other games in its lobby are available only on the provider’s wide network of online casinos and partners.

As you can notice, there are only 5 slots on the list. That’s because Deadmau5 slot that is missing wasn’t the sole creation of this studio, but the joined forces with Eurostar Studios who takes most of the credits.

Featuring a beautifully executed Christmas theme, A Tale of Elves slot is capturing the very essence of the holiday season. But don’t be fooled with a jolly design and mistake this release as easy-going. It comes with a very high volatility level, big winning potential, RTP of 95.07%, 243 ways to win, stacked symbols, scatter bonus and a unique extra spins feature.

The same volatility level and number of ways to win can be found in The Immortal Captain Rizk, but the RTP is higher at 96.68%. This innovative release offers a chance for unlocking superpowers in each of the special features. And there are a lot of them - Super Wild, Random Wild, Rolling Reels™, Multiplier Trail, Wild Laser, Bonus Progression.

Enchanted Oceans and Fishing Fever are both inspired by sea and feature the underwater theme. However, that's where similarities stop. Enchanted Oceans features 9 paylines, high volatility, RTP of 96.10% and just one special feature - extra spins with 3x multipliers.
On the other hand...
…in Fishing Fever there are 243 ways to win, much higher RTP (97. 49%), extra spins, Hyperspins and multipliers, but the volatility is at a low level.

Galactic Gold 5-reel slot with 25 paylines takes players on an intergalactic adventure where three special features are waiting to be unlocked – Extra Spins, Progressive and Bonus Wheel. Although the gameplay is a hoot, this low-variance game has the lowest RTP in the whole portfolio of just 88.12 %.

The famous Mega Moolah slot has got its jungle version, and Aurum Signature had the honor to craft it. The studio didn’t include it in its portfolio at the time of writing this review, but the whole gaming community got the news about the launch of this release.

Enriched with Microgaming’s signature progressive jackpot system, a five-reel slot game with 25 payline resembles the original by its mechanics. But it’s the formula that has suited the brand perfectly fine for over a decade now, so why fixing something that isn’t broken?

Either way...
…the provider managed to put its own stamp on the title with its excellent graphics and design. If you like games with progressive jackpots, this title is just another reason to give Aurum Signature Studio slots a try.

A Tale Of Elves