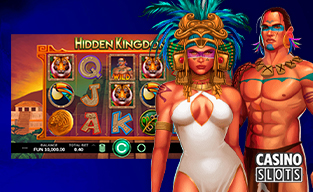 Caleta Gaming might be a new name for online slot players that live outside Latin America but punters from the thriving LATAM region are well familiar with games made by this Brazilian software provider. Established in 2013, the company boasts a solid portfolio of virtual one-armed bandits that unhurriedly but steadily gain popularity in different regulated markets across the world.

In May 2021, the fame of the studio went even beyond the regular gambling community, following a spectacular $123K win on Gamdom Strike, an engaging title that was specially designed for this once widely-renowned Counter-Strike Global Offensive betting site, which later turned into a BTC casino. As you can see, the brand is full of surprises, so let’s сheck what exactly it offers for an “ordinary” slot buff.

Engaging Stories From All Over The World

Modern players are spoilt for choice, never settling for less than a wide variety – no matter whether it’s about themes, extra features, or lucky combinations of symbols. Well, the diversity of Caleta’s library can exceed the expectations of the pickiest patrons, covering a broad spectrum of captivating stories from all over the world.

From hot Rio de Janeiro and incendiary Samba to Oktoberfest-inspired Village Brewery and Halloween with its spooky vibes. China Charms and Dragon Rising pay tribute to the rich Asian culture while Vegas Baby, Beach Tennis, and The Dressing Room are all about different ways to enjoy the high-of-the-hogg life. If you like drifting into a fairy tale, check out Crystal Unicorn or Enchanted Cash while adventurers at heart can give a spin to Pirates of Fortune and Caves & Treasures.

Those of you who still give preference to juicy flavors and tasty wins brought by fruits, bells, bars, and lucky red sevens will discover New Fruit, Wild Fruit, and even 3-reel Cherry Cherry. The latter, by the way, is not the only classic story, keeping company with Lucky K and other old-fashioned machines.

Online slots from Caleta Gaming will likely impress you with their range of extra features, some titles are simply stuffed with all conceivable and inconceivable bonuses. 20-line Crazy Lab, for instance, besides stacked and expanded wilds also offers free spins, spin re-trigger, single pick, and Pick & Match game with a multiplier. By and large, you’ll be hard-pressed to find a “plain-vanilla” release, so if you fancy plenty of action and who knows, maybe also play video games, this software developer can easily become your next favorite.

Gem Fever is another extra feature created by the studio to boost player engagement. Initially added to Torch of Fire, Princess of the Ocean, and Viking Madness, it quickly became popular for granting access to various types of bonuses. In the base game, punters can either collect gems to fill in the special progress bar or trigger the bonus by landing on the reels a certain combination of symbols.

In its turn, Rainbow Jackpot became the latest addition to Caleta’s assortment of rewarding extras. Introduced in June 2021, it was originally launched on the LatamWin platform to be later available across all partners of the studio. Players can take advantage of three progressive jackpots - Minor, Major, and Grand, hitting one of the top prizes without any extra costs. Well, can you think of a better way to make the most of your play?

Many software developers enhance their online slots with exciting Pick’em mini-games that usually let players have a say in the reward selection within a particular bonus feature. Well, people from Caleta went the extra mile to bring punters even more fun by introducing a one-of-a-kind concept of Pick’em Games. Equipped with a 5-reel and 1-row display, they can be played in two different modes – as an ordinary slot orPick’em adventure where players click on each position to reveal symbols instead of spinning the reels.

In contrast to the fruit machines we know, those also contain an “empty” icon that doesn’t award any prizes at all. It appears in both modes, making the whole plot a bit less exciting but obviously doesn’t affect the payback percentage, which remains above 96%. Intrigued? Simply check out Hungry Chef Pick’em, Halloween Pick’em, or Pick’em Fruits to see for yourself, all the more so, you can always try them in demo mode without spending a dime.