Gluck Games started off in Berlin, Germany in 2015. It is a small software company that focuses on slot games, table games, and instant win titles.

In recent times, they had started a strategic partnership with the UK’s Gamevy, and the whole thing became official when they announced a merger in 2018. Now they operate as a new entity called the Gluck Group. 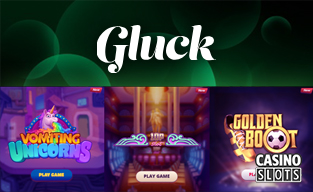 Even though the merger is meant to open a whole new world of opportunities, with a special focus on various state lotteries, including Lottmatica, Norsk Tipping, and The Health Lottery. Paul Dolman-Darrall is the CEO of the new entity, while Robert Lenzhofer retains the role of the managing director.

Robert Lenzhofer commented: “The merger of the two entities has already been executed on many operational levels and it’s a great match – on a people-level, on a product-level, on an office-geography-level and even on a customer-level the two companies almost fully complement each other.”

Paul Dolman-Darrall had this to add: We’ve been close colleagues and joint partners for what feels like a very long time. We know that we have a uniquely talented bunch of designers, developers and marketers and we believe that good as the success we have seen separately has been, together we will achieve even more. It gives us the ability to innovate more in our product development, serve our existing customers better and reach a whole range of new customers as well.”

So far, these guys have made quite a few games, but there are only seven video slots in their portfolio. They range from the classic and simple slots, to extremely creative video titles that share themes we haven’t ever seen anywhere else.

First off, they have a game called Vomiting Unicorns! No matter how silly it might sound, it is actually an amazing little game, and it really has unicorns vomiting rainbows. Besides this one, their another highly creative masterpiece is called simply - Snake. Do you remember the times when we played the snake game on our ancient mobile phones with monochrome LCD screens? Well, this one is based on that game and it is a true work of art.

7UP! And Jingle Up is much more simple and they are actually classic slots, only with a slightly different twist to it. 10P Slot is similar in concept, but don’t forget to check The Link and Spinlotto as those are really groundbreaking titles.

Gluck Games has a safe future operating as an integral part of the Gluck Group. Their games are few, but all of them are highly creative and innovative, so we can’t really wait to see what these guys will bring next to our favorite online casinos.

The Good The Bad The Ugly