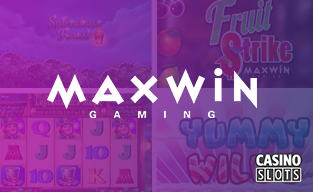 Max Win Gaming has been producing games since 2015, which some considerable success. They seem to have teamed up with most big providers, going as far as building up slots from scratch to other gaming studios. What else have they been up to?

Their own collection of games isn’t all that extensive, but it is certain to keep on growing. What matters is the quality, which is evident from each and every title you’ll find in the casinos.

These slots offer support to multiple platforms, works in most mobile phones, tablets and desktops, and come with support for several languages and currencies. Most importantly, the games are built for entertainment and exciting rounds.

One could really describe the style used in these games as sweet. You’ll often find the sort of symbols on the reels that almost make you want to take a bite or two, though a spin or two is just as good a result.

Whether it’s autumn leaves, fruits and slot terminals, or candy and clouds, you’re bound to witness extremely soft and detailed graphics. This is equally true whether you play or big or small screens.

Audio effects are perhaps not as spectacular, but they do more than their purpose, adding that bit of extra that really drive home the theme. Animations in these games are somewhat rare, but thanks to the way the games are done you don’t even really notice it...except when they do show up!

A touch of classic influence

When we say classic, we don’t talk just about the playing card ranks or other symbols associated with the style. Naturally, we also don’t mean that the games would look old. Rather, that you can expect to some familiar features, such as five reels of three symbols, a handful of paylines and a paytable that dishes out small and big wins.

The touch here is just that - a touch. It’s not the defining feature in any of the games, rather just something that makes it easy to step into the game and start spinning without too much thought. Perfect for a few minutes of fun.

And if I’m looking for something more modern?

Like we said, it’s just a touch! The core of the gaming experience in Max Win Gaming slots is without a doubt full of modern influences. From a handful of paylines you can get to hundreds of paylines, as well as systems that don’t even use paylines. Bonuses and different specials come into play in the form of bonus spins, expanding symbols, multipliers and wilds, and many more features.

In the end, these slots are perfect for those low-value spins that can result in payouts thousands of times your line bet. Of course, you better be ready for the high variety that such slots always come with.