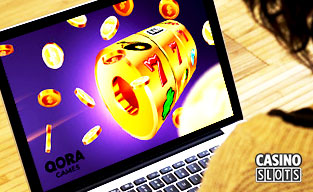 If you’ve already read our review of this software provider, then you know that Qora Games makes online slots worth attention. Even though the brand can’t yet brag of an extensive portfolio, its spinning adventures are anything but ordinary. According to QG designers, they strived to create unique products from day one, delivering the best possible player experience through striking visuals, an original approach to familiar themes, and, of course, engaging bonus features.

The brand works with a standard 5x3 grid but obviously gives preference to innovative mechanics, letting punters take advantage of a range of interesting solutions, from tumbling reels to lines that pay in more ways. Progressive Jackpots are also a part of the plot, so if you are dreaming of hitting a life-changing win, slots made by Qora Games can easily become your next favorites.

The short answer to this question would be that an amazing desire to make every single title a unique masterpiece is exactly what stands this software developer out from the crowd. In contrast to many other studios, the people behind Qora Games do not aim to churn out dozens of slots based on the same model and equipped with the same features that work in an identical way. Instead, they make sure to give a special touch to every story regardless of whether it is a classic slot or a blood-curdling thriller where zombies play soccer.

By the way, Zombie FC stuns not only with the plot and decaying corpses put on a barren pitch filled with the undead but also with the fact that this game uses three different sets of advantageous tumbling reels. It is one of the 243 ways-to-win slots that offer the full benefits of expanding wilds and free spins enriched with multipliers. Initially, players can activate 15, 20, or 25 free rounds while each consecutive winning spin within the bonus will trigger an increasing multiplier of up to 10x. Complemented by an RTP of 95.86%, this zombified release comes with a maximum win of 5000x total bet.

The relatively small online slot library created by Qora Games covers a wide spectrum of themes, which is clearly seen from the names of their most popular titles that range from A Night On The Nile and Ancient Warriors to Lucky 777 and Girl Racers. However, diversity doesn’t stop there but continues to come through the amazing characters brought to life by impressive animation.

It’s safe to say that A Night On The Nile (or A Night With Cleo at online casinos that belong to the Bovada Group) is the brightest example of how widely exploited ancient Egypt theme can bring an incredibly titillating experience, turning an ordinary Gamble feature into a spectacular show for adults. It gives punters not only the opportunity to double their winnings up to five times but also enjoy the company of charming and scantily clad Cleopatra who removes one garment for each accurate guess.

Stunning Cleo will also make five times bigger all wins during the free spins bonus. The latter can be re-triggered, so players can get up to 180 treats on the house in total.

As already mentioned, with Qora Games you can also count on staggering amounts of Progressive Jackpots. 777 Deluxe is one of the machines where delicious fruits offer the sought-after top prize, but this 10-line online slot is also chock-full of other incentives. To start with, it pays both ways plus in the central three reels, letting you make the most of three matching symbols. However, the bonus round triggered by three Question Mark icons is where things are getting really hot as players spin their way to one of eight multiplier prizes while Gold 777 awards the Progressive Jackpot.