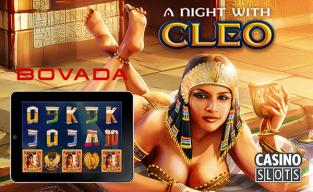 On 28th February, 2018, a Bovada Casino player from Virigina suddenly became $121,983.56 richer when the randomly-triggered progressive jackpot of the popular A Night With Cleo slot game was awarded.

With stakes of just $5 per spin, the lucky winner, who has been named as Carlos L. suddenly became the latest recipient of the progressive jackpot. A Night With Cleo has become famous with Bovada Casino players, as it's behind the majority of the big wins at this popular site. The jackpot has been claimed by players at $200 per spin, but Carlos L. has won a massive prize with far smaller stakes and now has numerous options about how to spend his windfall.

This 5-reel, 20-line slot from Proprietary Games takes the ancient Egyptian theme and adds a sexy twist to it, as Cleopatra awards free spins and wild substiutions. Players can gamble winnngs, picking a lotus flower from either the left or right hand of the Queen, doubling their win with each successive correct pick, while Cleopatra also removes an item of clothing each time.

An alluring theme, and the allure of a jackpot win have turned A Night With Cleo into a huge success at this US-friendly online casino.