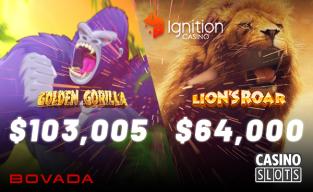 Hitting a big, jackpot payout is exactly what a lot of players look to do when they sit down to play some slots and other games, and that's what has happened to a pair of lucky players recently at Bovada and Ignition Casino. Each of these sites has seen a big winner recently, and they're both parts of winning streaks that have been going on for players there since the beginning of the year.

First off, a lucky player named Martin F. From Illinois, USA, was able to take down a $103,305 payout on the Golden Gorilla online slot. What makes this win so incredible is that it was hit off of a $1 wager, and that means he won more than 100,000 times the size of his bet with this payout. This is a jungle-themed game with different gorillas on the reels, and it's full of different types of features based on these different animals.

The Lion's Roar video slot at Ignition Casino has a random progressive that gives players a chance to win a big payout on every single spin without having to hit any particular combination of symbols. This came to a player by the name of Amber S. from California, USA, and she picked up around $64,000 by hitting this jackpot and winning some other pays. Her streak comes after another Ignition Casino player from California recently won around half a million playing the Crazy Camel Cash slot, so it's definitely jackpot frenzy over there right now.

Each of these two online casinos have great selections of slots, many of which have progressives and other big jackpots that can turn you into a major league winner in a single spin. That's what happened to Martin F. and Amber S. recently, and it's happening to other players pretty regularly at these two sites as well. Both Bovada and Ignition Casino are good places to play, particularly if you're a US player who likes having chances to take down life-changing amounts of money.