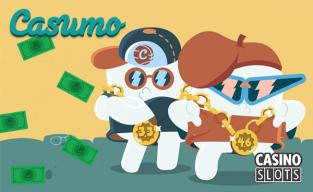 Progressive jackpots provide the biggest payouts in the world of online gambling, and the Mega Fortune progressive jackpot by Net Entertainment is a good example of this type of prize. Recently at Casumo Casino, two players hit this jackpot just days apart from each other, which created two instant millionaires almost back-to-back. The details on these wins are pretty interesting, and they go to show that this online casino is creating some pretty big winners.

Each of the Jackpot Prizes

The first win was worth €3,317,639, and it was hit on the Mega Fortune slot. This is a very impressive win, but what happened next is even crazier. Just five days later, another player won on the same jackpot but with the Mega Fortune Dreams game, and this was to the rune of €4,621,607. Not only is this an impressive win in its own right, but it's also the largest jackpot that this online casino has ever awarded.

There are two games that have the Mega Fortune jackpots. The first is the original Mega Fortune slot, and the second is the Mega Fortune Dreams slot, which is an updated version of the original. Net Entertainment has kept both versions of the game around because players enjoy them both, and what's so crazy about it is that this isn't even their only seven-figure progressive jackpot. At the time the record-setting jackpot was won, NetEnt's Hall of Gods jackpot was worth almost €4 million. If someone hits that at the same casino soon, then it would mean one of the biggest winning streaks at the same site that we have ever seen.

Casumo Casino has been in operation since 2012. They are known for their promotional system that puts players in the drivers seat with an adventure-based theme, and they use a combination of software from Net Entertainment and Microgaming Quickfire. This makes it easy for players to get a tremendous selection of titles from the best developers in the world, which is exactly what leads to things like this pair of big jackpot wins that happened almost back-to-back. They have lots of great slots, including some of the largest progressive jackpot games in the industry.