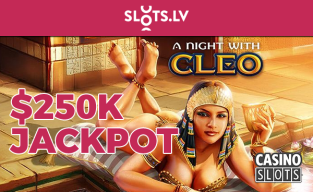 A Night With Cleo has become one of the most popular online casino slot games and it's easy to see why, with yet another massive progressive jackpot paid out in the last few days.

Last weekend, a Pennsylvania resident named only as Laura L. was spinning the ancient Egyptian themed reels of A Night With Cleo at Slots.LV Casino when she was suddenly awarded a huge progressive prize of $251,385. She had only been playing at stakes of $2 per spin when the prize was claimed, making this a fantastic return on her wagers.

It's a randomly-awarded jackpot, so Laura didn't even need to line up any particular combination of symbols to win it, and the prize has now been re-set to the base value of $16,000.

This will rise quickly, as A Night With Cleo not only follows a popular theme, but also comes with plenty of bonus features for those players who don't win the jackpot to enjoy. There's free spins, wild substitutions and a fun double or nothing feature that sees Cleopatra removing clothing with each successful gamble.

It's one of a huge selection of games at Slots.LV Casino, which features the popular Betsoft and RTG ranges and is available to play across mobile and desktop platforms.

A Night With Cleo