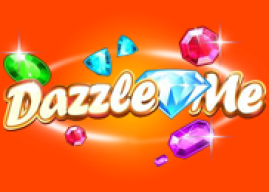 The thing that keeps players really interested in Net Entertainment is that they are always innovating. They very rarely build games around well-known media brands, and instead, they prefer to come up with their own themes and concepts so that they can build complete games around them. This is definitely the case with the new Dazzle Me online slot that features a really atypical format and features and bonus items that just make sense.

How Dazzle Me Works

When you first look at Dazzle Me, you'll recognize that it's a lot different than most video slots right away. It has five reels, and the first two look pretty normal with three symbols apiece. On the third and fourth reels, however, this jumps up to four symbols each. Finally, the fifth reel has five symbols. This lends itself to a really atypical layout with 76 different paylines, and that's something that we can't really remember ever seeing before. If that's the case, then this is truely the first of its kind, and that's something that's really hard to do in the video slot world to begin with.

The theme of Dazzle Me is pretty straight-forward with a combination of traditional slot symbols and gems. The first feature you'll notice the most often is the Linked Reels feature that they've used in other games before. In this game, however, it brings on a whole new meaning because of how it can link together the first two reels or the third and fourth reels only because of the way the layout is presented.

On top of that, there's an opportunity for free spins. During the free spins, you're guaranteed linked reels on every single spin, and that adds a tremendous amount of value. For people who aren't familiar with this feature, the way it works is that two reels become connected in the sense that they will always show the same symbol on each corresponding part. This means that you already have matching symbols on three or four rows for two of the reels, and this drastically increases your chances of hitting winning combinations because you only need one more symbol to hit three of a kind or two more symbols to hit four of a kind.

If you're interested in trying out this new game, then check out BetVictor Casino.