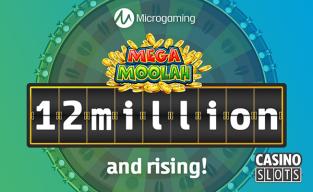 Mega Moolah is one of the most famous slots in the world, thanks largely to the massive progressive jackpot that comes with the game. Microgaming has announced that the progressive prize has just passed the 12 million mark, and it will keep on rising until a lucky punter triggers the jackpot win.

This wildlife themed slot plays out over 5 reels and across 25 paylines. Players are treated to bonus features such as wild substitutions that double winnings and a free spins round where payouts are tripled in value.

But the highlight is the progressive jackpot, which rises in value as a small percentage of all wagers placed on the game, at all online casinos, is put aside. When the jackpot round is triggered, players will see a wheel of fortune which they spin to collect prizes. Players can win the Mini, Minor, Major, or Mega Jackpots and it's this last one which has just surpassed 12 million. The prizes are paid out in the local currency used to play the game.

The Guiness Book of Records recognises Mega Moolah as the slot which has paid out the biggest online progressive prize in history. A soldier from the UK won £13.2 million in 2015. The jackpot prize is heading towards this total and with the feature triggered randomly after any spin, this massive reward could be scooped at any time.

Mega Moolah is a Microgaming classic. It’s a millionaire maker, a record-breaker and has been awarding life-changing wins since its release in 2006.