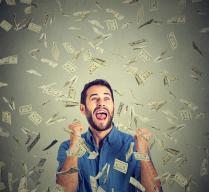 Progressive online slots are responsible for several millionaires each year, and there have already been three awarded during the month of January. The month isn't even over yet, and NetEnt has paid out more than €7.6 million total to three different winners with wins on Mega Fortune variations and Hall of Gods, their two largest progressives. This is a pretty incredible way to start the year, and it sets a pace for 2016 that will be tough to keep up.

The first win came on January 15. A player from Finland was able to take down a win worth €3.4 million on Paf with the Mega Fortune Dreams game with a bet of €4. The next came just two days later on January 17 when a player at Casumo nailed a win worth €2.7 million. This second player was from the United Kingdom, and this time the win came on Mega Fortune. Finally, January 19 saw a win worth €1.6 million scored on Hall of Gods at Vera&John Casino. This winner's name is Lars, and he's from Norway.

For NetEnt's games to make three millionaires inside of five days, that just shows that they're seriously about turning players into millionaires. A statement by the software giant mentioned that they have created over 55 millionaires from 10 different countries total, and includes more than €250 million in payouts from big progressive jackpots. With over a quarter of a billion dollars tied up in the winnings from these games, it's easy to see that they're some of the most important and well-respected titles in the industry as a whole.

NetEnt has been around since the late 1990s, but they've only really become well-known over the past five or six years due to the extremely high-quality slots that they have focused on. These titles are among the best in the business, and they're great examples of what you can do with today's technology. Players are drawn to their titles because of their great graphics, storylines that make sense and innovative features. Their games have won a lot of awards at some of the biggest shows in the industry, and nothing about that is expected to change as they make a strong charge into 2016.