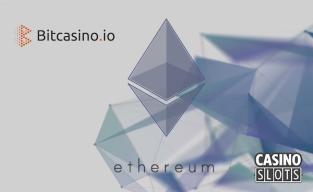 Bitcasino.io is one of the top crypto-currency casinos and they have recently made a couple of improvements which should appeal to players. The site now welcomes the Ethereum currency, which is widely used and second only to Bitcoin in popularity. They have also adopted a new mobile cashier facility which allows punters to easily track deposits and withdrawals.

The integration of Ethereum into the casino will open it up to a new set of potential players, while giving existing customers an extra option. They can now deposit, play, win and withdraw using both the first and second most valuable crypto-currencies in the world. Customers will also be able to take advantage of BTCXE, which is a flat to Bitcoin currency converter and the first used in the online casino industry.

The mobile cashier function comes as online gambling via smartphones and tablet computers reaches an all-time high. Punters will be able to quickly see their deposits into their Bitcasino.io accounts and withdrawals of winnings at any time.

With over 1,400 slots, table and card games in their range, Bitcasino.io has risen to become a leader in the crypto-casinos market since they opened in 2014. State of the art security systems and withdrawal times that average 1.5 minutes have also helped Bitcasino.io grow so quickly.

We’re always looking to innovate and stay one step ahead of our rivals, and that’s exactly what we are doing with the launch of our mobile-first cashier and addition of the world’s second most valuable cryptocurrency.