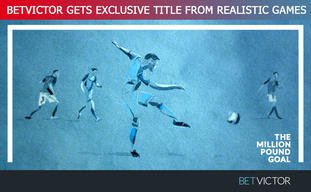 There's a big promotion and a big release happening at BetVictor Casino right now thanks to Realistic Games. The new Million Pound Goal title has been released there, and it's tied to a big promotion where the top winner could take down a GBP 1 million prize. The player who is able to correctly guess, or come the closest overall, the minute and scorer of the first goal in the finals of the Euro 2016 tournament will pick up this amount. In the case that more than one player guesses correctly, it will be split evenly between them.

This new slot by Realistic Games has the same name as the promotion, and along those lines, it has a Euro 2016 theme. There are five reels, three rows and 10 paylines of action, and you'll see balls, whistles and plenty of other symbols of the game on the reels. It's a great example of a sports-based slot, and it's an exclusive release just for BetVictor Casino at this time.

An important part of this release is the simple fact that it's available on both desktop and mobile channels. This simultaneous release on both key platforms is important because it shows that both this online casino and Realistic Games are bringing out their newest titles for the mobile sector, the fastest-growing sector in the entire industry. It also means people get to take their play with them on the go when it comes to playing this Euro 2016-based title during the Million Pound Goal competition.

More Details on the Promotion

To earn a prediction in the Million Pound Goal competition, a player at BetVictor Casino has to wager at least GBP 5 on the slot by the same name. For every GBP 25 wagered afterwards, players are given another prediction, and there's no limit to the number of predictions that you can earn. That means that the slot and the promotion are tied together in a very important way, and the more you play this game, the more shots you get and the better your odds of taking down a piece of one million pounds.