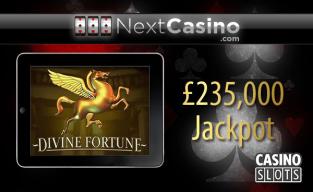 We love hearing about big wins from players, and that's why we were excited to hear news out of NextCasino recently. They've announced that a lucky player by the name of James from the United Kingdom was able to take down a jackpot worth £235,000 on the Divine Fortune video slot. This game has a set of progressive jackpots, and it was only released a couple of months ago, so it's cool to see it paying out major wins so quickly.

What Makes Divine Fortune Stand Out

This online slot uses five reels, three rows and 20 paylines with a Greek mythology theme. It's powered by Net Entertainment, and the graphics are excellent. Other than the jackpots, something else that really drives the gameplay is the plethora of available features, including free spins, falling wilds, and other wild options. James was able to make it to the jackpot bonus feature before taking down a payout worth almost a quarter million.

So far in 2017, we've seen some pretty big payouts up in the six-figure and seven-figure range, and that's not too surprising considering there are so many players getting in on the action with games that have such amazing top prizes. Net Entertainment in particular is known for their record-breaking jackpots, but with NextCasino, you also get progressives from other major software developers like Microgaming. This company produced the game that holds the current world record, which broke the previous world record held by a NetEnt-developed title, so it's clear that you're getting access to the biggest jackpots in the industry when you play with this casino.

This online casino has been running since 2013, and they use the EveryMatrix platform. This platform is known for having the most games of any standardized platform out there today, and they do this because they have content distribution deals with virtually every big name out there. Aside from Microgaming Quickfire and Net Entertainment, you get games from IGT, Play N Go, Quickspin, Rabcat, NYX Gaming, NextGen and tons of others. On top of that, there is a welcome package that includes 150 free spins and up to £700 in bonus offers.