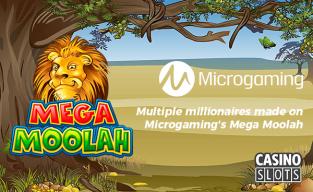 There's been a winner each month so far, with the first multi-million jackpot awarded on 14th January when a player at Zodiac Casino landed an enormous €2,424,117 prize. The end of February saw a Royal Vegas Casino player scooping €4,769,344 and just nine days later, on 8th March, €4,365,843 was paid out to a lucky punter at Captain Cook's Casino.

The biggest haul in April was claimed when a Grand Mondial Casino customer lined up the right symbols and collected €4,603,056, and it's not just Mega Moolah that's creating all this wealth, as other slots in the Microgaming progressive network have joined in.

A Mega Win On Major Millions

A Betsafe player won €1,896,616 when the 5-reel Major Millions progressive slot paid out, and like all Microgaming prizes, it was instantly awarded as a lump sum, rather than in annual payments.

With over €874 million in jackpots paid out since the inception of the Microgaming and related Quickfire progressive network, it looks like 2018 could be another record breaking year.

We all thought 2017 would be a hard year to top after the network paid out over €150 million in jackpots, but 2018 is shaping up to be a huge year for Microgaming’s progressive jackpot network! Multi-millionaires have been made each month so far