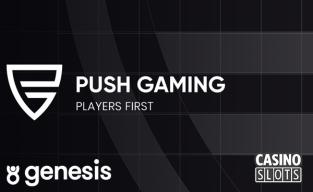 Following the agreement of a new deal with Genesis Global, the range of slots from Push Gaming will now be made available across online and mobile casinos such as Casino Gods, Spinit, and Pelaa.

Push Gaming has developed a number of innovative slots, such as Fat Rabbit, Jammin; Jars, and Wild Swarm. The games use impressive graphics and exciting features, which have giving Push Gaming an enviable reputation.

Recent releases include the hugely popular Razor Shark and Shadow Order. The new deal was brokered by Relax Gaming and it will further enhance the popularity of Push Gaming.

“Genesis Group offers some of the most popular and sought-after online casinos among players in the UK and other regulated markets around the world. “Success in part has been down to the great range of slots games offered.''