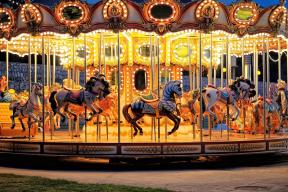 Rival Gaming is known for providing players with an interesting selection of games based around atypical themes. They've done this again with their upcoming release Cirque du Slots, and it's an interesting title in that it's based completely around the circus. This game features clowns, acrobats and a lot of bonuses and ways to get paid. It's going to be a big game to help them close out 2015 on a strong note, and players are sure to love it.

The Cirque du Slots game uses a familiar video slot format with five reels and 25 paylines (three rows only). This is one of the most standard forms of games available today in the online slots industry. The game is based around multiple acts, just like the real circus, and you'll push the game along to the next act by picking up three or more of the unicycle icon on the reels at the same time. This is much like their i-Slot games that have a theme and story that runs throughout the entire game.

Pick up three or more of the clowns to start a valuable set of free spins. The green acrobat will also give you expanding wilds in various directions, but the regular wild already expands vertically and gives you three times the normal value of any payout that uses it. The free spins have wilds expanding in different directions, including both horizontally and vertically in the third act. Overall, this is a feature-packed game that has a lot going for it in terms of giving players several ways to win, and that contributes to the high-action atmosphere that you'd expect from the circus.

Right now, Rival Gaming has been pushing more in the past 12 months to up their game totals than we've seen them do ever before. This is really interesting because they've started to push more towards high-quality games that are rich in gameplay and features instead of just trying to have better graphics than everyone else. The end result is that they have games that load quickly but that give players an excellent experience, and that seems to be a winning combination for them so far.

If you want to try out the Cirque du Slots online slot that comes out in late November, then you can do so by checking out Play2Win Casino.