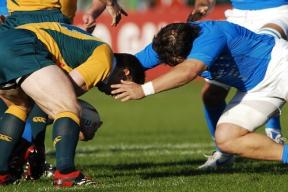 Rugby is a high-action game with a ton of intensity, and that makes it the perfect choice to be made into an online slot. Microgaming has jumped at the opportunity with the upcoming Rugby World Cup on the horizon, and this has led to the Rugby Star online slot coming up for release soon. This game will sound familiar to people who know the Cricket Star and Football Star games, and it has a similar look and feel as those previous sports titles in the same line.

To start things off, Rugby Stars uses five reels with three rows, and it also uses the 243-ways format that Microgaming has been particularly fond of over the past couple of years. The Rugby Star symbol is wild in this game, and that helps you to get more wins that you wouldn't have gotten otherwise. There's also a randomly-triggered Wild Pass Feature, and that feature will make two reels entirely wild to give you some chances at much easier five-of-a-kind wins.

You'd expect a ton of action from an online slot based around rugby, and that's exactly what you're getting with Rugby Star. Along those lines, it uses the Rolling Reels feature to give you tons of opportunities for picking up several wins on the same spin. The way this feature works is that your winning combinations on any spin are paid, but then the winning symbols explode to allow new symbols to fall in place. This process continues as long as you keep winning, and this gives players lots of extra value.

Three or more of the scattered ball symbol will trigger the free spins. During the free spins, you get a multiplier trail on the Rolling Reels feature to pick up multipliers that go 2x, 3x, 4x, 5x, 10x, in that order. In short, you can pick up multipliers as high as 10x in the free spins game, and that makes massive value. Overall, this game is looking like it packs all of the necessary action to do a rugby-themed online slot justice, and we're sure that players are going to be super excited to play.

A good option for playing the new Rugby Star slot would be 32 Red Casino with their extensive history for taking care of their players.