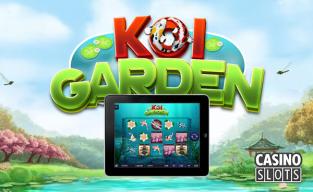 There's no denying that there are a lot of online slots in the industry that are based on Asian themes. The Koi Garden online slot by Makitone Gaming sets out to give players an overall experience that is as relaxing as it is exciting with a great combinations of beautiful graphics, soothing sound and a balanced pay table with lots of features.

What we believe is the most critical thing about the Koi Garden slot is that its theme and gameplay style match up perfectly. The theme of the relaxing, Japanese garden is all about helping the player to relax, and the gameplay does not jolt the player out of that, which would create a conflicting overall experience. Instead, it's given a smooth volatility with few big swings, even though you do have opportunities to win some pretty significant prizes. These happy primarily through the bonus features.

The features are driven by two different bonus features that are tied to two different scatters. The dragonfly symbol is the first scatter, and when you get three or more, you'll pick up a set of free spins. You can earn as many as 15 free turns from this feature, and you get multipliers as high as 3x. You can see why this particular feature could be responsible for some major wins.

Three or more of the water lily, the second scatter symbol, takes you to a different feature based on the pond itself. You'll see koi swimming in the pond, and all you have to do is pick out some of those fish. You'll be given instant payouts for those picks, and they're all added up and paid out to you at the end of the feature.

Makitone Gaming is a company that produces both mobile- and desktop-based online slots. They use HTML5 as their primary platform, and they are known for having games available at Ignition Casino. Their games focus on quality over quantity, so while they don't have an overwhelming number of games, their titles like Koi Garden definitely show off what they can do with both graphics and gameplay.