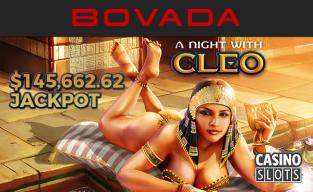 It's going to be a very happy Christmas for one lucky player at Bovado Casino, as he's just won a huge progressive jackpot payout. A random jackpot feature on A Night With Cleo has just landed Aage L a massive $145,662.62 prize.

HOW DID HE LAND THE JACKPOT?

Playing A Night With Cleo on 15th December, a player known only as Aage L from Iowa, was at a $100 stake when the randomly-awarded progressive jackpot was suddenly triggered. There's no need to land any particular set of symbols in this slot from Proprietary Games, and the jackpot can be scooped at the end of any spin, even if it wasn't a winner.

The progressive prize has been reset and it's now rising again, as a percentage of all bets on the game is put aside until the next lucky spinner gets awarded a massive jackpot win.

ABOUT A NIGHT WITH CLEO

A Night With Cleo was released in 2016 and has already made a number of players much richer. It's a 5-reel slot, with 20 paylines and of course, follows an ancient Egyptian theme, starring the most famous ruler of them all, Cleopatra. She's a wild symbol that can create additional winning lines, doubling the base value when this happens, while a special scatter icon will treat players to a free spins bonus round where wins are tripled.

If Cleopatra completes a win-line during the 15 bonus games, wins are multiplied by 5x over, and any spin can end in a progressive jackpot win.

Bovada Casino is one of the best know US-facing sites and has been around since 2011. Games from multiple developers, and lots of bonus funds that can be used to play them with, has ensured that this casino remains as one of the top destinations, not only for US residents, but also for players across much of the rest of the world.