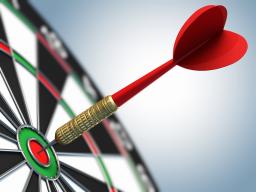 Television shows aren't often made into online slots, but when they are, they're usually done in such a way that everyone involved is very happy with the finished product. That's exactly what's looking to happen with the new Bullseye classic slot that's being produced by Microgaming. Based on the hit TV show from the 1980s, Bullseye is all about matching up the right prizes to win big. Just like on the television show, throwing darts has an important place in this game.

The Bullseye slot looks to have three reels with just a single payline. This is a format that isn't used all that often these days, so it'll be interesting to see what Microgaming does with it. The game has wilds, multipliers on your payouts and a bonus feature based on how the game show was played.

If you pick up the Bullseye symbol on the last reel, then you'll be taken to a spinning dartboard. This bonus feature has players winning as much as 1,000 coins. The top prize in the game is a 5,000x win that players get by picking up three of the dart symbol on the payline with a max bet in place. This symbol is a wild multiplier in regular play.

It's really interesting that Microgaming those to make this gameshow into a single-payline classic slot. They've stayed away from this format for quite a long time, as have most other major software providers, because it's thought that the format doesn't give players enough flexibility to stay interested. It's hard to have a lot of action on a game with as restrictive of a format as this, so we'll have to wait and see how Microgaming is going to handle this in terms of gameplay.

Microgaming has come through on more new titles than any other online casino software company in the world, and being the first to power an online casino back in the mid-1990s probably has something to do with it. With the addition of a single-payline classic slot like Bullseye, it shows that they're willing to take risks in every direction, and that's a quality that's helped them with their success. The only thing left to see is if it pays off or if the new Bullseye slot falls flat.

Players who want to try this game when it releases can do so at Euro Palace Casino.