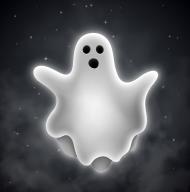 Years ago, Microgaming released the Peek-a-Boo classic slot that used three reels and that gave players a fun combination of ghost hunting and Halloween excitement. This month, they're going to release an updated video slot version of this game just in time for the Halloween season, and it just goes to show that they're always staying on top of keeping their game selection as fresh and relevant as possible. This new video slot has a lot of features the old version didn't have, and it's going to be jam-packed full of action.

This game uses five reels with four rows. It uses 40 paylines during the normal game, and most of the regular gameplay revolves around the free spins meter that you can see up the right-hand side of the game. When you get the ghost hunter kid symbol on the center reel, he'll randomly shoot ghost symbols on the reels with his ghost-hunting gun. Those ghosts are added to the meter, and when you pick up at least ten, you're given a set of free spins. This means that your free spins are going to come fairly regularly, and that adds to the action of the time.

The majority of your value in this game will come from these free spins, and it's this feature that most of the game revolves around. The whole point is that you're getting a number of extra features during the bonus round. First of all, the game expands to be 1,024 ways instead of having just 40 paylines, and that's a tremendous difference since every symbol essentially becomes a left-to-right scatter.

What's more is that the wilds are stacked on the last two reels in the free spins to give you better chances of four- and five-of-a-kind wins. You'll also get re-spins with the Spooky Reels feature when you nail a winning combination that has the rest of the reels spin one extra time to give you a chance at getting larger payouts.

This game is a good example of Microgaming's overall strategy that often involves leveraging the older titles in newer ways. We've seen this with HD versions of some of their older titles as well as newer sequels in recent years like with the Avalon II online slot.

If you want to take your shot at the ghost-hunting fun with this game, then we suggest playing with 32 Red Casino.