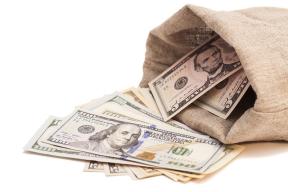 Progressive jackpots have always been the most popular type of prize available in the online casino world because of how incredibly large they are. When a player wins a life-changing amount of money as the result of one spin on a game, it's an extremely exciting time, and it gets a lot of coverage. A lucky player at Roxy Palace was able to find this out for himself when he picked up a whooping €1,166,534 on the Major Millions slot, one of the most popular progressives online.

Over the past few weeks, Roxy Palace has had a number of major progressive jackpots just waiting to be hit, and Major Millions isn't the only one of those. Their largest progressive is for Mega Moolah, and it's sitting at about €11 million at the time of this writing. This is in the range of the largest that it's ever been, and that's pretty impressive in and of itself, but whoever is the lucky winner for this jackpot is going to be rolling in dough in a real way.

Major Millions is a progressive slot powered by the Microgaming software. It uses five reels and three rows with 15 paylines, and it has an older graphical style that's very endearing to the people who are fans of this particular game. As one of the iconic titles for Microgaming, tons of people show up just to play this title on a regular basis with its cartoonish military theme and chances for multipliers. Eric found out for himself just how fun this game could be when he picked up €1.2 million with his win recently by lining up five of the Major Million icon on the 15th payline.

The History of Roxy Palace

Roxy Palace has been running since 2002, and they have more than a decade of experience in giving players a good time. They operate with the Microgaming online casino software package, and this gives players a selection of hundreds of games to choose from. This selection includes a number of progressives, but those aren't just on slots. They offer progressive video poker and casino poker titles as well. This just goes to show that they have something to offer every type of player who wants to score a big win.